Help Center
Sign Up
Login
Contact us Contact us
HomeUsing FrontProductivity tips
Tags & organization
Once you've mastered the basics, learn how to work even faster and more efficiently in Front.

How to move messages and split conversations

Are replies from different customers being threaded together, or is it hard to tell what part of a chat conversation a tag is referring to?

Anyone on your Front team can move an email message into a new conversation or split a text/chat conversation, so you can handle them separately. Replies will thread in the latest conversation, and each conversation will have its own tags and assignee.

The channels that have this feature are:

Depending on the channel type, the feature may look different. Follow the instructions for your conversation type below.

Move an email message to a new conversation

How to use it

This must be a single message — you can’t select multiple messages and move them as a group. Any messages after the message you select will remain in the original conversation.

Click the message options menu and select Move to new conversation in the dropdown. 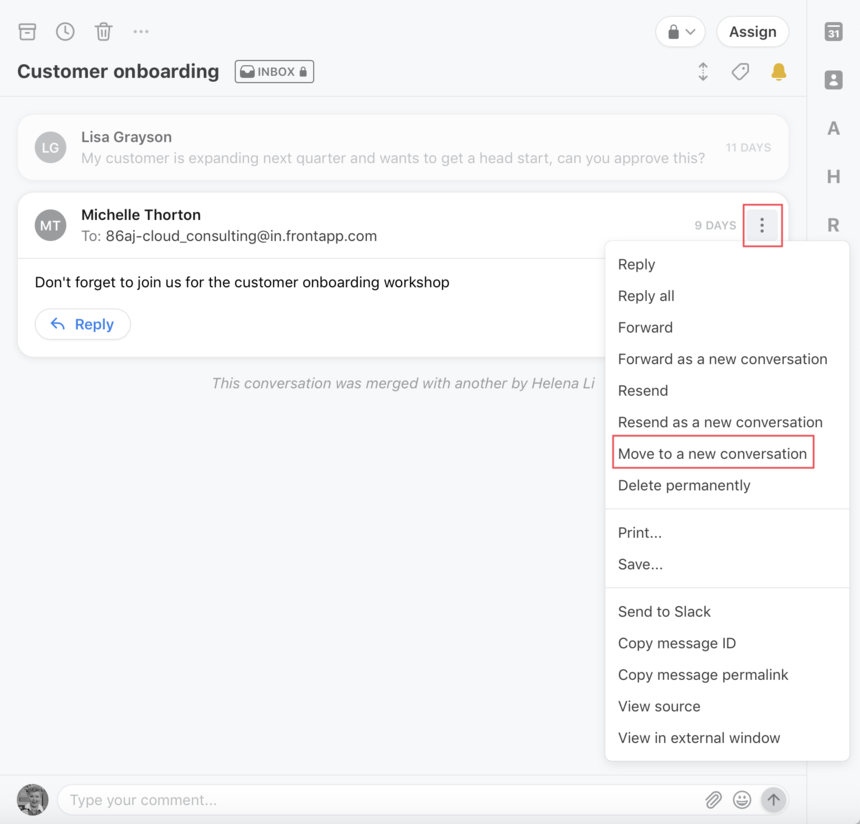 Click Move when it asks you to confirm the move. This action cannot be undone, though you can use our merge feature to combine the threads later. 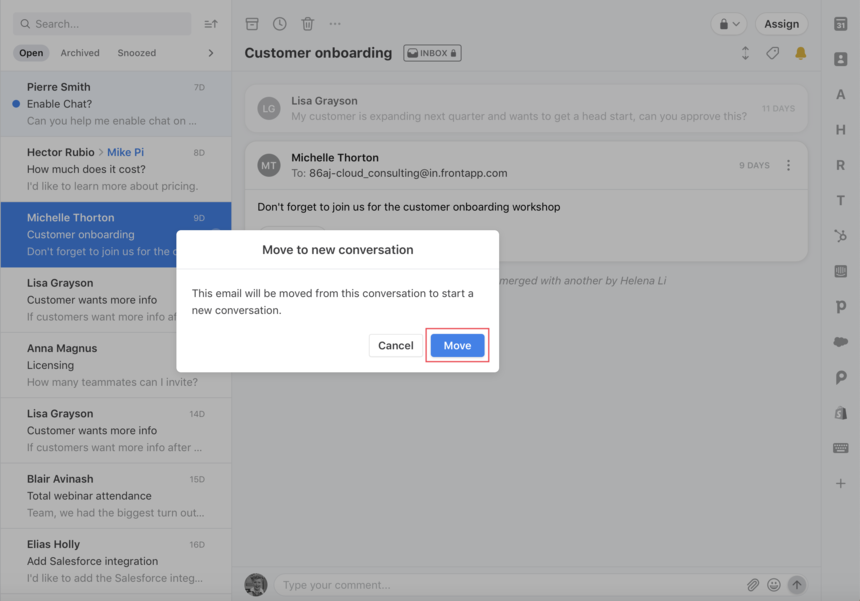 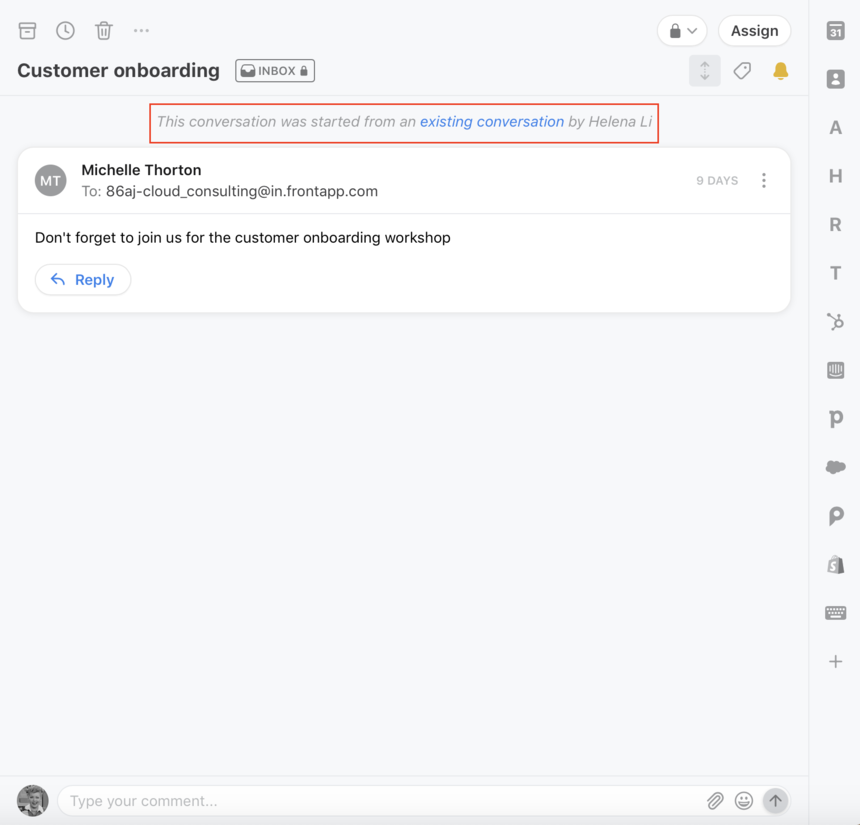 There will also be an activity line in the original conversation linking to the new conversation.

Moving messages is only visible to your Front team, not to the external recipients on the thread. To make it easier for them to keep topics separate, we recommend changing the subject line when you reply to the new conversation to something different from the original.

If you frequently use the Move message feature, we suggest changing your threading mode to another option, which will disable the sync of archiving, deleting, and tagging with Gmail/Office365. All emails will continue to show up in both Front and Gmail so you can access them in both systems.

Custom channels do not have the option to move a message to a new conversation.

Split a SMS or chat conversation

Without splitting, messages in SMS, WhatsApp, Front Chat, Facebook, Intercom, and Smooch channels will continue in one long thread. This can make tagging very messy, as it’s hard to tell which part of the conversation a tag is referring to.

When a customer starts chatting or texting about a completely new topic, you can split the conversation into a new thread with its own tag. That way, tag filtering and analytics stay clear and easy to understand.

How to use it

Open a conversation you want to split in an SMS, WhatsApp, Front Chat, Facebook, Intercom, or Smooch channel. Select the message you want to use to start the new conversation.

Click on Split conversation in the options menu for that message. 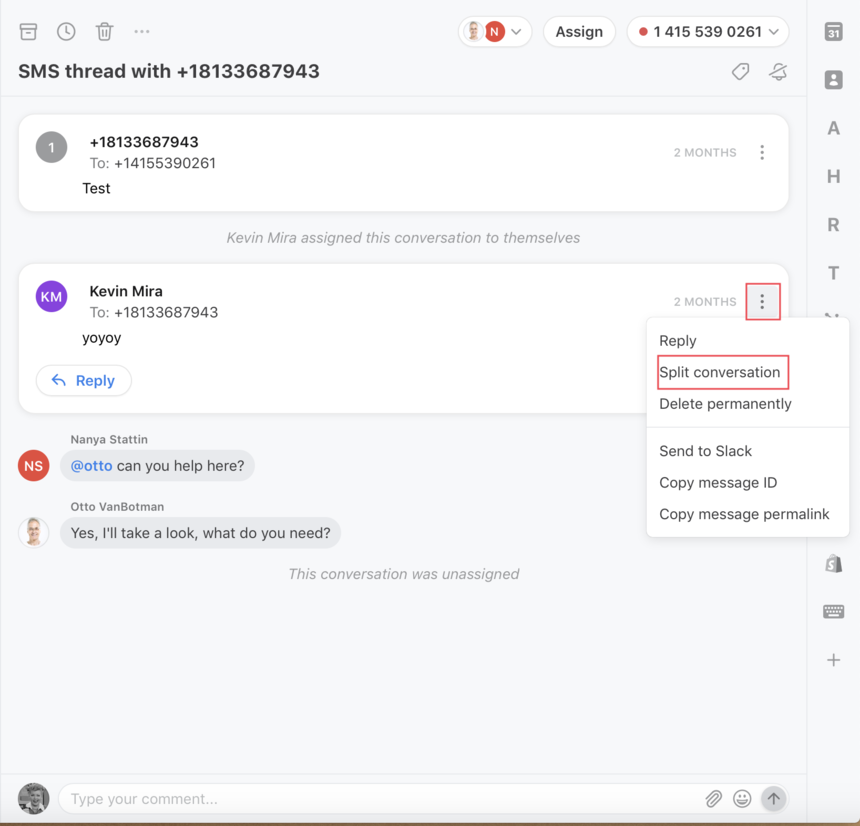 Click Split in the popup menu to confirm you want to split the conversation. 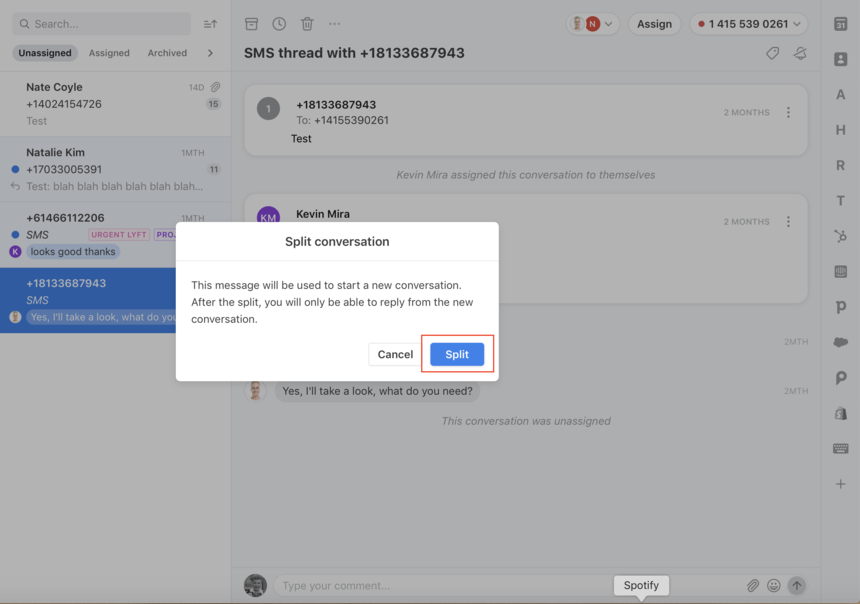 You’ll immediately move to a new conversation starting with your chosen message. If the message was not the last one in the conversation, any subsequent messages will be moved over also.

You will only be able to reply from the new conversation. Use the link at the bottom of an old conversation to navigate to the latest thread to reply.

Choose the message you want to use to start the new thread. Once you split it, all subsequent replies starting with that message will be moved over from their old conversation into the new one. The split will be invisible to the person you are chatting or texting with so your conversation appears continuous to them. Splitting a conversation is just a helpful way to stay organized in Front.

There will be activity lines in each conversation that link to each other, and anyone with access to the original conversation will have access to the new split conversation regardless of inbox permissions. You will not be able to reply to the old thread, and all new inbound messages from the contact will thread on the new conversation.

We will surface an error in the app if you try to split a conversation that would have more than 50 messages in the new thread.