How to use variables in canned responses

Front has default variables that will populate from the fields of your saved Contacts. To use a variable, simply type two double curly brackets {{ when composing a new canned response or signature. The list of variables will appear, and you can select the one you'd like to use. 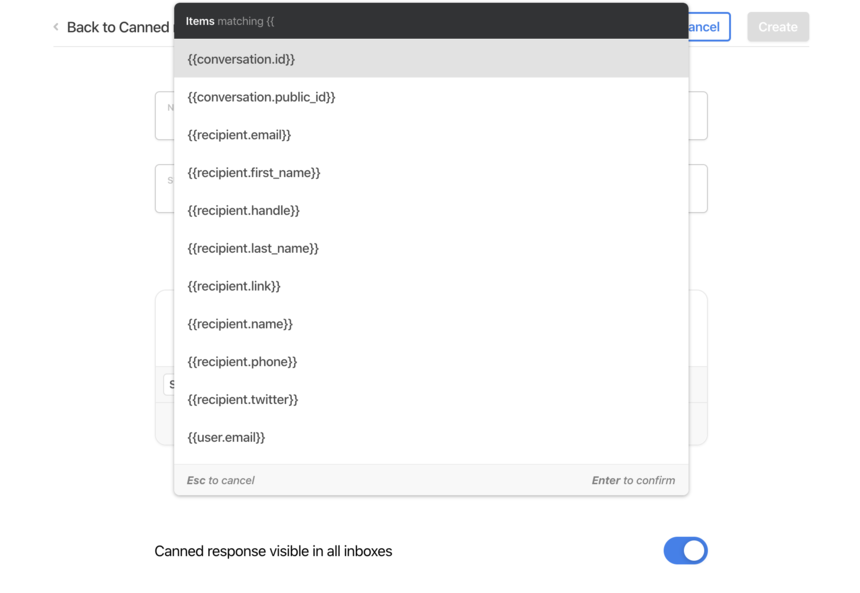 Front's Contact Manager allows you to add your own custom fields for your contacts, such as a customer ID or a job title, and you can use these fields in custom variables for your canned responses. If you do have custom contact fields, then typing the two double curly brackets {{ in the canned response composer will also pull up any custom options you have created in your Contacts.

If the recipient name does not exist in your Contacts, the variable will not populate in your canned response, in which case you should define a fallback. When defining a fallback, make sure you surround it with single quotes:

Do variables work with automatic replies?

If you are using canned responses in rules to send automatic replies, the {{user...}} variables, which is the Front teammate sending the message, will be blank because no user is actually tied to the reply, as it is automatic.

Do variables work in the subject line?

When you insert a canned response manually in your message, the variable will work in the body, but not in the subject if you have one set up in the subject.