Front can automatically merge conversations together when one recipient of an email @mentions, assigns, or invites other recipients on their copy of the conversation. When that happens, a smart merge will be triggered so all the teammates involved can work on one unified copy together.

**To learn more why they'd already be merged, see Reduce duplication of emails.

Smart merges happen automatically when you @mention, assign, or invite other recipients on your copy of the conversation, or when you're @mentioned, assigned, or invited on theirs. There's no additional steps needed to trigger a smart merge. Here's how it works:

Someone emails multiple email addresses that are all managed in Front.

In this example, Emily has emailed sarah@ccc.com and rachel@ccc.com , which are both private email inboxes in Front: 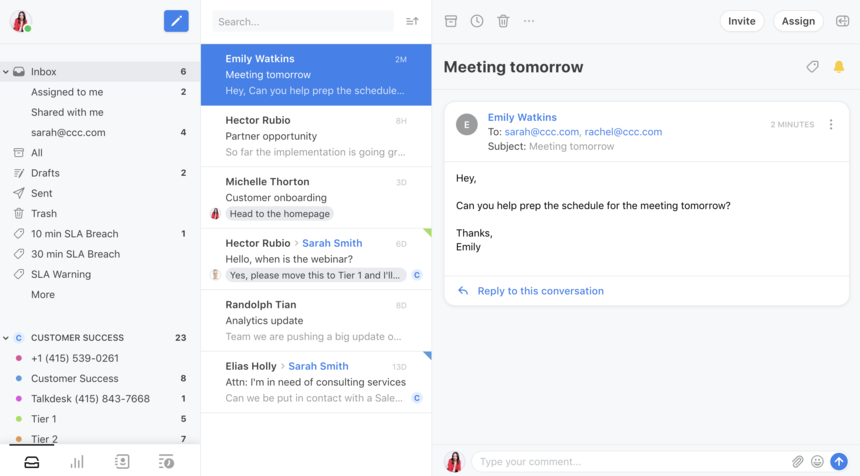 When one recipient @mentions, assigns, or invites another, their conversations will be automatically merged into one conversation. This is a "smart merge", and you can immediately see when this happens because both teammate avatars will be shown in the participants menu.

Here, Rachel @mentions Sarah on her copy to trigger the merge. After that, Rachel and Sarah are owners of a joint conversation 👑 Being an owner means you cannot be removed from the conversation. 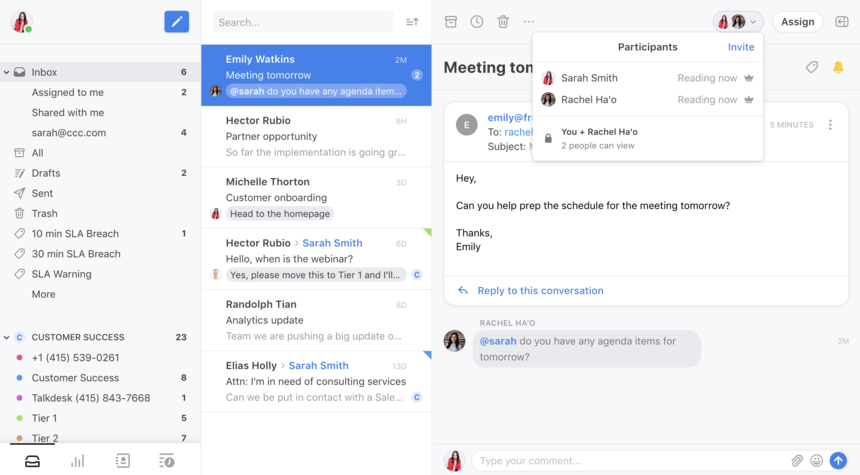 Once the conversations have merged, any comments or replies from either teammate will be visible to the other so they can work together on one copy. 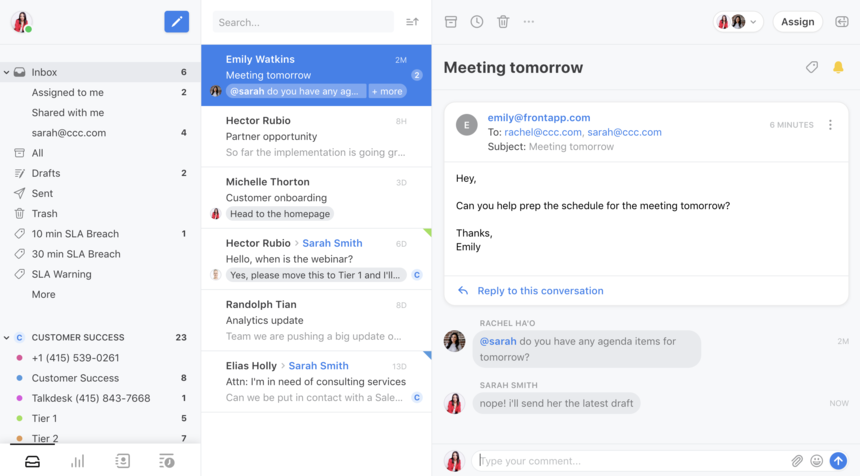 Are there any instances a smart merge won't happen?

The merge will happen as long as there are no conflicts between your copies of the conversation when recipients @mention each other. Conflicts in copies are:

Can a smart merge happen between team and individual email channels?

Since you cannot @mention a team inbox, there is no way to merge that into "your copy". Only your private copy can be merged into the the team inbox copy by someone @mentioning you there.

Can a smart merge happen between two team email channels?

Nope! The email will already be a shared between the two team inboxes. Therefore, there's no need to have a merge.

Can I manually merge conversations?

Can a smart merge happen between a recipient and a sender?

Yes! For example: Mike emails Sarah, and Sarah @mentions Mike on her copy of the email. Their conversations will merge assuming that there is no conflicting information in the threads, like if Mike has @mentioned  someone else already or tagged his copy.

In some cases, Front will auto-split the conversation again to avoid possible confidential content being exposed on an auto-merged conversation. A new inbound message will create a new conversation if:

- The new message was sent only to you

- You did not comment on or assign the conversation